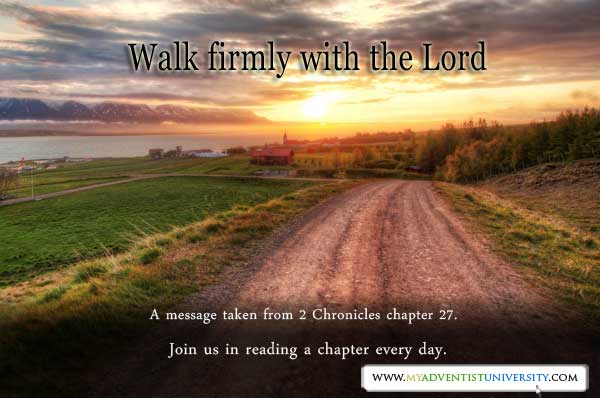 Walking before the Lord. – God gives power and strength.

Our verse of reference in 2 Chronicles 26 is:

“He did what was right in the eyes of the Lord, just as his father Uzziah had done, but unlike him he did not enter the temple of the Lord. The people, however, continued their corrupt practices.” (2 Chronicles 27:2 NIV).

The reign of Jotham son of Uzziah and Jerusha. He was king for 16 years and follow the Lord as his father did, but did not make the mistakes that cost Uzziah his life. God bless Jotham and give him power.

We learn 3 lessons today…
Jotham did what was pleasing to God. – The punishment given to Uzziah seemed to have had a lasting influence on his son. Jotham assumed heavy responsibilities during the last years of his father’s reign, and succeeded to the throne after the death of Uzziah. The following has been  written about Jotham: “And he did that which was right in the sight of the Lord: he did according to all that his father Uzziah had done. Howbeit the high places were not removed: the people sacrificed and burned incense still in the high places. He built the higher gate of the house of the Lord.” 2 Kings 15:34, 35. Approaching the end of the reign of Uzziah, Jotham was already taking many of the burdens of the state, It was here when Isaiah, a young man of royal lineage, was called to the prophetic mission.


Jotham did not go to the temple.- Uzziah acquired leprosy because he wanted to offer incense in the temple, he had to be secluded to a separate location. This disease made it impossible for him to enter the temple, because it is considered unclean. Jotham made ​​the mistake of not going to the temple to meet God and offer sacrifices, probably he was angry with God for having punished his father. We learn that one should not stop going to church because someone treated us badly, or because there is hypocrisy in the members, or because people judge without having all the elements. Do not get angry with God because a loved one died, or because they did not return a special favor. Attend church to worship and praise God in the beauty of His Holiness.

Jotham did not make any religious reform.– Jotham was good only for himself, not for his people. He did not motivate religious changes, he did not participated in the reading and interpretation of the Torah, and he did not send priests and Levites to admonish the people and make them leave the idolatry.
Prayer
Our Father which art in heaven. Encourage your people to attend church services. Help us prefer to gather in church, rather than watch TV, movies or novels in our homes. Give us a spiritual change in our homes and our churches. In the name of Jesus, Amen.