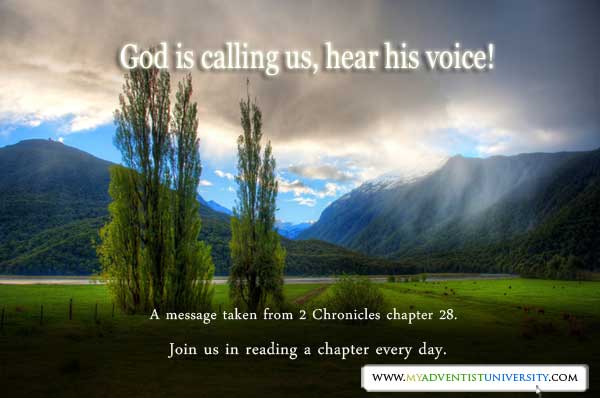 Apostasy and divine love. – Regardless of our sinfulness, God’s love waits for us to hear His call and be restored.

Our verse of reference in 2 Chronicles 26 is:

“ Ahaz was twenty years old when he became king, and he reigned in Jerusalem sixteen years. Unlike David his father, he did not do what was right in the eyes of the Lord.” (2 Chronicles 28:1 NIV).

Historical review. – Ahaz’s ascension to the throne put Isaiah and his friends in a position to face conditions never before experienced in Judah. Many who had endured the seductive influence of idolatrous practices were being persuaded to take part in pagan worship. Towards the end of Ahaz’s reign, he close the doors of the temple, the sacred services were interrupted, fire did not burn before the altar anymore, there was no more sacrifice for the sins of the people, and the smooth incense did not ascend to heaven every morning or evening.  The people abandoned the courts of the house of God and close its doors, the inhabitants of the wicked city boldly built altars for the worship of pagan gods in the corners of the streets of Jerusalem (PR 238, 243).

Consequences of Apostasy. – We summarize the following consequences: a) They replaced the atoning sacrifice of Christ, by the sacrifice of children, b) They were defeated by Syria and many were taken prisoners; c) Pekah, king of Israel killed 120,000 brave soldiers of Judah in a single day, d) 200,000 people were taken captive to Israel  e) the Edomites and Philistines destroyed part of Judah, f) Tiglath Pileser, king of Assyria, instead of supporting Ahaz, attacked him and took all the riches from the Temple. Despite these misfortunes, Ahaz refused to repent.

Love of god for your children. – God sent prophets to the king and to the people with the message to return to His worship; a) He sent OBED to warn the leaders of Israel, thanks to this the 200,000 prisoners were able to return home, they were to be sold as slaves, b) ISAIAH was called to preach the messages of salvation, but no-one heard: “Surely the arm of the Lord is not too short to save, nor his ear too dull to hear.” Isaiah 59:1,2   c) He used Micah to show them the way forward: “He has shown you, O mortal, what is good.    And what does the Lord require of you? To act justly and to love mercy   and to walk humbly with your God.” Micah 6:8.

Prayer
Dear God of mercy. We pray for your gift of discernment, please help us to hear your warnings and not suffer the consequences of evil. We ask to receive your forgiveness and restoration. In the name of Jesus​​, amen.