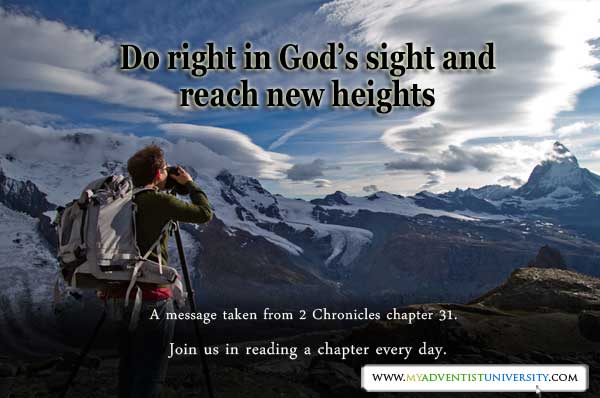 Doing what is good, right and faithful. – When we seek the Lord and follow His commands He will prosper us on earth and for eternity.

Our verse of reference in 2 Chronicles 31 is:

“This is what Hezekiah did throughout Judah, doing what was good and right and faithful before the Lord his God.” (2 Chronicles 31:20 NIV).

The chapter can be summarized in three parts. First, the people of Israel destroys the altars and idol worship places in Judah and neighboring cities. Second, the priest and levites were restored and organized to receive tithes and donations so they can focus on the work of the temple. Third, the king gives from his personal possessions to restore the various functions of the temple and holidays mentioned in the word of God.
Reflection

What should we learn from Hezekiah?
Historical Review.- There was still important work to be done, which should take an active part those returning to their homes, a work whose fulfillment would evidence the reformation. The story says: “…the Israelites who were there went out to the towns of Judah, smashed the sacred stones and cut down the Asherah poles. They destroyed the high places and the altars throughout Judah and Benjamin and in Ephraim and Manasseh. After they had destroyed all of them, the Israelites returned to their own towns and to their own property.” Hezekiah and his associates instituted several reforms to strengthen the spiritual and temporal interests of the kingdom. “In all Judah,” the king “which was good and right and truth before the LORD his God. Everything that he said was done with all his heart, and prospered.” PR 250.

Gave example with our own behavior.- It is easier to tell or command: Do something… However, the challenge for leaders, parents, teachers or mentors is to show by example what a thousand words can not. Hezekiah made it his priority to firstly seek God in his life, this example led a revival and reform to all the people of Israel. The spirit was multiplied throughout the city of Israel: “When the party ended, the Israelites who were there went through the cities of Judah to bring down the sacred stones and the images of Asherah. Also completely demolished the altars and the high places that were in the territories of Judah, and Benjamin “(verse 1). We should be agents of spiritual change among the people.

Gave example by giving.- It is easier to say “donate”. However: “The king spent PART OF THEIR PROPERTY for the restoration of the morning and evening burnt offerings, the burnt offerings for the sabbaths, and all feasts, as they are written in the law of the Lord” (verse 3). When the people say the  king giving to the temple from his own possession, they also gave in abundance, to the point that there were “left overs” (verse 7).
Prayer
Dear loving father, inspire us to become agents of change among our people. Let us be an example in conduct and giving. In the name of Jesus, amen.