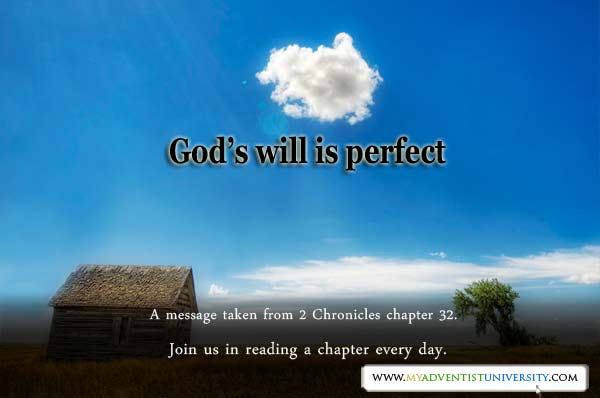 God will be known through us. – We are the living proof of God’s power and care, our example preaches to the world.

Our verse of reference in 2 Chronicles 32 is:

“After all that Hezekiah had so faithfully done, Sennacherib king of Assyria came and invaded Judah. He laid siege to the fortified cities, thinking to conquer them for himself..” (2 Chronicles 32:1 NIV).

Chapter 32 of 2 chronicles continues to show the faithfulness of Hezekiah and how God blessed him in everything. The message for this chapter may be summarized in one sentence: God listens when we talk to him. In this chapter we see how God protects Israel because of the faithfulness of Hezekiah and at the same time for the defraying thing that the king of Assyria said to the Lord. Ultimately we see the value of remaining humble and in close contact with the Lord.
Reflection
Why after consecration are difficult tests?

Historical Review. – Hezekiah’s reign was marked by a series of remarkable providences, which revealed to the nations surrounding Israel that God was with his people. The success of the Assyrians to take Samaria and disperse among the nations the remnant of the ten tribes in the early part of his reign, induced many to question the power of the God of the Hebrews … A few years after the fall of Samaria, the victorious armies reappeared in Palestine, this time to direct his forces against the walled cities of Judah, and had some success, but withdrew for a season due to difficulties that arose in other parts of his kingdom. Some years later, towards the end of the reign of Hezekiah, It came to be proven if the pagan gods of the nations of the world were to prevail over the God if Israel. PR 250.

Trials arise in order for us to place our trust in God.- Hezekiah worked on two fronts: a) did everything that was humanly possible, developing a strategy to defend himself and and fight the enemy: He blocked the water wells that were outside the walls , rebuilt the wall, put walls towers, built an interior wall, manufactured weapons of war, b) placed all his trust in the Lord with these words: “Be strong and courageous. Do not be afraid or discouraged because of the king of Assyria and the vast army with him, for there is a greater power with us than with him.”(verse 7).

Trials arise in order for us to praise God for his saving grace.– If there were no trials, would may not see how God leads us, protects us and frees from Satan and those who wish us harm, “And the Lord sent an angel, who annihilated all the fighting men and the commanders and officers in the camp of the Assyrian king. So he withdrew to his own land in disgrace. And when he went into the temple of his god, some of his sons, his own flesh and blood, cut him down with the sword.” (Verse 21).

Prayer
Dear God of wonders. Please increase our faith, that we may lear to trust that everything is under your control. That the trials you allow to come to us are to demonstrate your love for us and do great miracles on our behalf. In the name of Jesus, amen.