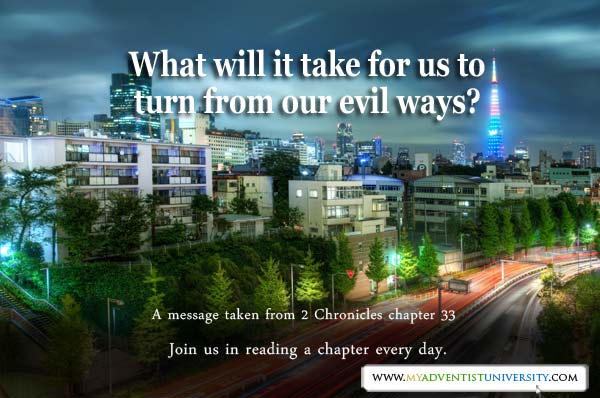 God is always ready to forgive and restore. – At every turn in our lives God is with us and seeks our faithfulness.

Our verse of reference in 2 Chronicles 33 is:

“ So the Lord brought against them the army commanders of the king of Assyria, who took Manasseh prisoner, put a hook in his nose, bound him with bronze shackles and took him to Babylon.” (2 Chronicles 33:11 NIV).

Chapter 33 of the book of 2 chronicles denotes the immensity of God’s love for us, the chapter lead us to see the evil and sinful ways of Manasseh. He did everything one could imagine to be an abomination to God to the extent that the bible says he did more evil that the nations God had destroyed because of their sin (Verse 9). But at the pick of the kings sins, he remembered God and repented, God hear his pray and restored him. Although his son, Amon, did not learn the lesson and was quickly removed because of his sins.
Reflection

God forgives, but the consequences of our behavior extent into our future.
Historical review. –
The testimony that was given in favor of the truth and justice angered

Manasseh, one of the first to fall victim of this anger was Isaiah, who for more than half a century had stood before Judah as a messenger appointed by Jehovah. As a result and a sample of what was to come to them if they continued in sin, the Lord allowed their king to be taken captive by the Assyrians, who “led him bound in chains to Babylon,” their temporal capital. This affliction made the kind come to his senses and repent, he “prayed to the Lord his God and humbled himself greatly before the God of his fathers. And when he prayed to him, the Lord was moved by his entreaty and listened to his plea; so he brought him back to Jerusalem and to his kingdom.” But this repentance, as remarkable as it was, it was not influential enough to save the kingdom from the sinful influences of years of idolatry by the king. Many had tripped and fallen, never to rise. PR 282.

Personal consequences.- Manasseh suffered the consequences of his actions and for having shed the blood of the prophets and the faithful children of God. Manasseh was the only king of Judah and Israel that was brought temporarily into exile as an animal, because it was led shackled and HOOKED by the noce. This word in Hebrew, is the act of piercing the nose to put a ring on the oxen to make them more docile. How low can one fall before returning to God?

Consequences for the people of God.- Although Manasseh repented, the people of Judah spiritually rioted. The immoral and sinful behavior of the inhabitants of the southern kingdom, overtook the number of pagans who lived in Palestine. How much misfortune and disastrous consequences can fall on to our family, business or place of work, when we turn away from God!

Dear Holy Father. We beseech thee grant us wisdom and strength to live holy lives, that our testimony may work for the salvation of many. In the name of jesus, amen.