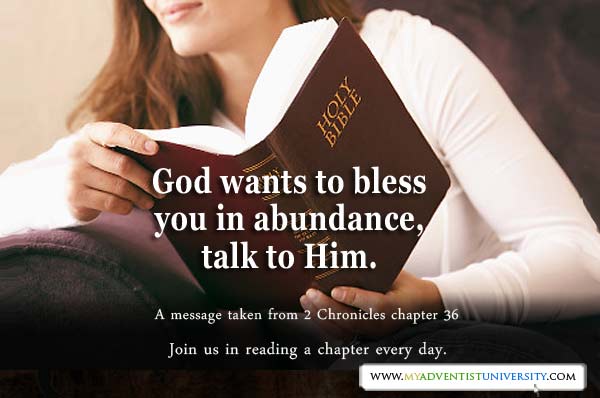 Faithfulness to God. – God is waiting for our repentance to have a relationship with us and bless us in abundance.

Our verse of reference in 2 Chronicles 36 is:

“But they mocked God’s messengers, despised his words and scoffed at his prophets until the wrath of the Lord was aroused against his people and there was no remedy. ” (2 Chronicles 36:16 NIV).

Reflection
Historical Review. – In a few short years the king of Babylon would be used as an instrument of God’s wrath upon the impenitent Judah. Again and again  Jerusalem was surrounded and soon to give way besieging armies of Nebuchadnezzar. One company after another, composed at first a few people, but later on thousands and tens of thousands of captives were to be carried to the land of Shinar, to dwell in forced exile. PR 311.

Joaquin kings Jehoahaz ruled Judah only for three months and were removed. These kings shows contempt for divine warnings and pay the price for it. The two kings had a short period of grace to repent. we must give pause to not dismiss the Holy Spirit’s call to repentance and change of behavior.

Jehoiakim and Zedekiah reigned eleven years. Jehoiakim did what was evil in the eyes of the Lord, so God allowed Nebuchadnezzar to take him to Babylon, bound in fetters. Zedekiah would not listen to the messages that God sent through Jeremiah, he was stubborn and would not turn to the Lord, the God of Israel (Verse 13), for these reasons, God allowed his children to be slaughtered before him, and then his eyes were put out, so that the last memory on his would be that of the death of his children.

Conclusion I gather from reading the books of the Chronicles.- a) FIDELITY TO GOD, brings the joy of abundant blessings. It means to be rescued and miraculously saved by Him. Fidelity is having a close relationship with God and enjoy his presence, b) INFIDELITY  TO GOD leaves us in the hands of Satan,  this leads to complete degradation of man: murder, abuse of power, theft, moral perversions. The devil leads his followers into slavery and make them human scraps.
Prayer

Gracious God. We ask that you grant us the discernment of spirits, to be responsive to your call and warnings. Do not let us fall into the hands of the enemy. In the name of Jesus, amen.