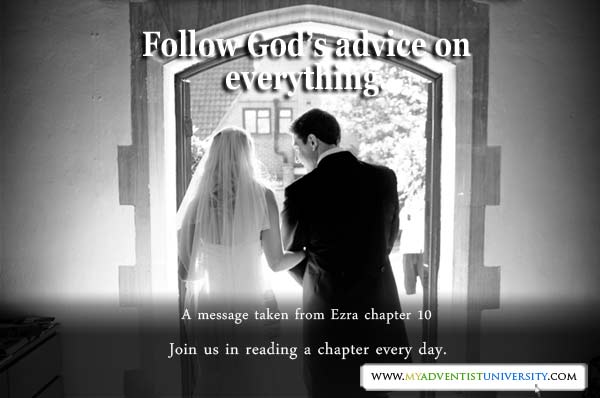 Guard your heart. – Ask God daily to give you a life partner that can enrich your life and bring you closer to God.

Our verse of reference in Ezra 10 is:

“Then Shekaniah son of Jehiel, one of the descendants of Elam, said to Ezra, “We have been unfaithful to our God by marrying foreign women from the peoples around us. But in spite of this, there is still hope for Israel.” (Ezra 9:5 NIV).

Mixed Relations.
Historical Commentary.- By studying the causes that led to the Babylonian captivity, Ezra learned that Israel’s apostasy was related to their affair with the pagan nations. He had seen that if they obeyed God and keep from mixing with the surrounding nations, they would have evaded many sad and humiliating experiences. When Ezra learned that despite the lessons of the past, eminent men had dared to transgress the laws given, his heart was moved. The kindness shown by God in giving His people another chance to settle into their homeland, and was overwhelmed with righteous indignation and regret by the revealed ingratitude. PR 462.

Inappropriate relationships.- often young men and women downplay the dangers of beginning a love relationship with a person with different beliefs than theirs. Nevertheless, the analysis of many cases revealed the following disadvantages: a) They may not be able to marry through the church, as most religious groups only marry people of the same belief, b) Children have problems identifying with one religious because often they don’t know what to belief c) generally the difference in values, habits, education have huge differences, producing friction and discussions.

In marriage.- If one is already married , The Biblical counsel is the following: 1 Corinthians 7 “And if a woman has a husband who is not a believer and he is willing to live with her, she must not divorce him. 14 For the unbelieving husband has been sanctified through his wife, and the unbelieving wife has been sanctified through her believing husband. Otherwise your children would be unclean, but as it is, they are holy. How do you know, wife, whether you will save your husband? Or, how do you know, husband, whether you will save your wife?” 1 Corinthians 7: 13, 14, 16.

Our Father. You know what’s best for our lives, because you are our creator and redeemer. We pray for our precious youth, that they may accept Your biblical advice. In the name of Jesus, amen.