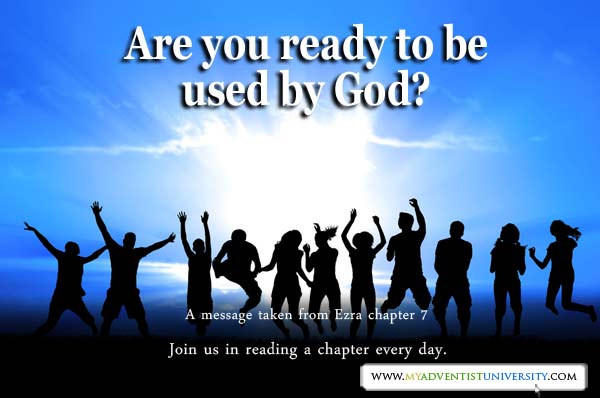 Present the best of your abilities to God . – Let God mold us and shape us in order for us to use all our talents and abilities for His work.

Our verse of reference in Ezra 7 is:

“ This Ezra came up from Babylon. He was a teacher well versed in the Law of Moses, which the Lord, the God of Israel, had given. The king had granted him everything he asked, for the hand of the Lord his God was on him.” (Ezra 7:6 NIV).

Develop the characteristics of Ezra.

Versed in the Law of God. – Ezra endeavored to prepare his mind and heart for the work of God. He sought God earnestly, believed in Him and waited for His will, with the desire to become a wise teacher for Israel. And he learned to yield his spirit and his will to God, he accomplished to incorporate in his live the principles of true sanctification, which in later years exerted a molding influence, not only young people who sought his instruction, but also in all those associated with him. Ezra became a spokesman for God, educating people about the principles of God and God’s heavenly reign. During the remaining years of his life, whether near the court of the king of Medo-Persia or when he was in Jerusalem, his main work was to teach. He was a pious and zealous man. Before the world, Ezra is a testament to the power of the bible in everyday life. PR 282.

Enjoyed the sympathy of Artaxerxes. – In the public letter that the king Artaxerxes sent to Ezra, he denotes admiration and acknowledges that he even came to believe in the God of Israel through the testimony of Ezra, His faithful son. This witness made ​​the king along with seven of the councilors and the people of the kingdom to give Ezra everything he asked to rebuild the temple in Jerusalem. Do we follow Ezra’s example of giving a good testimony where we work or study, does our relationship with people speaks of our relationship with God?

Dear all-powerful God. We ask that you may ignite in us the desire to be knowledgeable and skilled in your word. Prepare us to give testimony of your glory, your company and your gift of love. In the name of Jesus, amen.