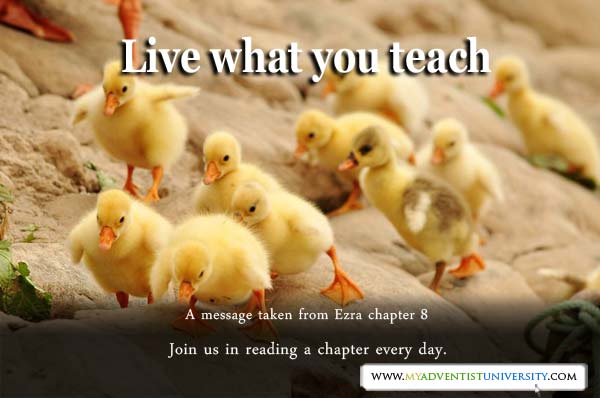 How to live what you preach . – Let us ask GOD daily to give us the strength and opportunity to preach through our actions.

Our verse of reference in Ezra 8 is:

“This Ezra came up from Babylon. He was a teacher well versed in the Law of Moses, which the Lord, the God of Israel, had given. The king had granted him everything he asked, for the hand of the Lord his God was on him.” (Ezra 8:22 NIV).

Live what you preach.

Historical Commentary.- The  people of God were ready to march, a journey of several month was ahead of them. The men help to carry the great treasures for the temple and the utensils for the services. Ezra knew that the their enemies were ready to plunder and destroy them on their way, and yet he did not asked the king for the protection of the armed force. In this case, Ezra and his companions saw an opportunity to praise the name of God before the heathen. Their testimony and trust on the power of God was to be reveal implicitly by their faith in their divine Leader. Therefore, they were determined to put all their trust in God, they did not ask for guard or soldiers, to prevent the unbelieving nations to attribute to the strength of man the glory that belongs to God alone. They could not run the risk of waking up in the minds of their pagan friends any doubt as to the sincerity of their faith in God and His protection. PR 449.

Ezra said to the king that the hand of God protects those who trust him.- Ezra was willing to take the risk by not seeking help from the troops of the empire to protect them in that journey of 1,200 miles. The caravan was composed of 1,339 men. They had 24,750 kg of silver, and 3,308 kg of gold, this wealth would tempt any enemy or tribal thieves to attack them. Ezra was certain that God would protect His children, whether they may be few of many. Remember “it’s safer to be united with the Lord, and lose the favor and friendship of the world, than to gain the favors and support of the world and forget our dependence on God” (RH 8.1.1884).

Ezra sought strategy to strengthen their faith.- Before starting the trip, he seeked God. Before facing any problems or challenges, the people of God  strengthened their faith. Through FASTING AND PRAYER ask for whatever you need to achieve success, God will provide and meet your expectations.

Our Dear Almighty God. We pray that you may increase our faith and strengthen us to live what we teach. That through fasting and prayer we may find your will. In the name of Jesus, amen.