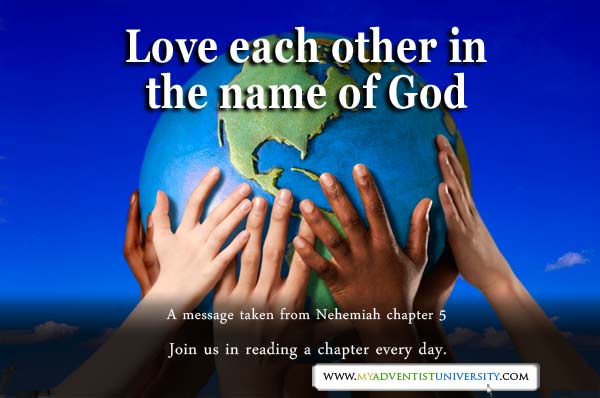 Show God’s love through your care for those around you.– .

Our verse of reference in Nehemiah 5 is:

“But the earlier governors—those preceding me—placed a heavy burden on the people and took forty shekels of silver from them in addition to food and wine. Their assistants also lorded it over the people. But out of reverence for God I did not act like that.” (Nehemiah 5:15 NIV).

When one fear God, there is also respect for those around us.
Historical Commentary.- Nehemiah and his friends had redeemed some Jews who were sold to the pagans as slaves. Nehemiah shows and contrasts how the behavior of the people was shaped and sacked by the love of worldly gain, to the extend of enslaving their brothers. Nehemiah explains that He was invested with authority by the Persian king, he had the authority to  demanded large contributions for personal gain, but instead of doing so, had not received even what belonged to him, but had given it to relieve the needs of the poor. The governors urged the Jews guilty of extortion to renounce their wicked practice, return the lands to the poor, also the interest on the money demanded of them, and lend more money to them without collateral. PR 480.

Fear God.- Nehemiah was certain that all his actions were under the divine guidance. He had no fear of punishment, was only afraid of letting God down, the God who loved him and granted him abundant blessings. Dear brothers and sisters, our gratitude for the divine mercies, out of respect and fear of God, let us move away from all sin, flee from temptations, avoid even the appearance of evil. Let us live in holiness, serving God through our witness.

Respect others.- If we fear God, we will be courteous and defend to our neighbors, for they are God’s creatures. It is unacceptable for a child of God to misuse his/her authority or power, to abuse his spouse, children, employees, neighbors and even animals. Like Nehemiah, seek ways to rescue our brothers who are experiencing misfortunes, sufferings. We should use our resources to alleviate the hunger or the needs that our brothers may be going through.

Dear God, you see and know it all. Out of the love and respect we have on your presence, we pray that your Holy Spirit may keep us from evil and sin. We want to walk with you, and reflect with love and respect to our family and neighbors what you have done for us. Transform us into vessels of honor. In the name of Jesus, amen.