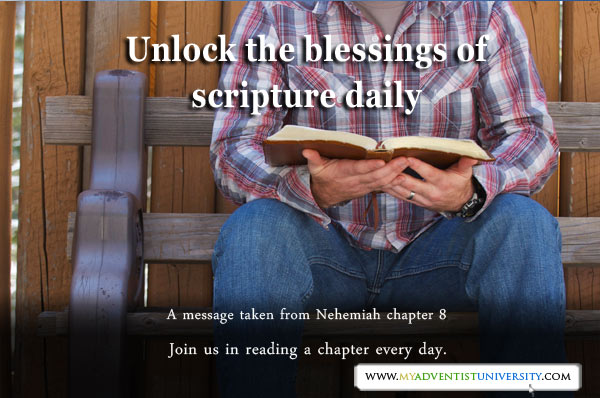 Read you Bible.– There are great blessings for those who seek the Lord daily through the Scriptures.

Our verse of reference in Nehemiah 8 is:

“ So on the first day of the seventh month Ezra the priest brought the Law before the assembly, which was made up of men and women and all who were able to understand.” (Nehemiah 8:2 NIV).

Benefits of reading the bible.
Historical Commentary.- “The ears of all the people were attentive unto the book of the law.” listened with reverence the words of the Most High. Upon disclosure law explained, they were convinced of his guilt and wept for their transgressions. But it was a day of celebration and joy, a holy convocation. The first part of the day was devoted to religious exercises, and people spent the rest of the time remembering God’s blessings grateful and enjoying the goods that he had provided. Portions also were sent to the poor that they had nothing to prepare. There was great rejoicing because the words of the law had been read and understood. PR 490.

Illustration.- This happened in 1892: A man in his 70’s was traveling on a train, seated next to him was a university student who was reading a science book. The gentleman, in turn, read a book with a black cover. When the young man realized that it was the Bible, He ask: – Sir, do you still believe in that book full of fables and stories? – Yes, but it is not a story book, this the Word of God. Am I wrong? – Of course it is. I think you should study world history. Would see that in the French Revolution, which occurred over 100 years ago, showed myopia of religion. Only uneducated people still believe that God made ​​the world in six days. You sir should know a little more what our scientists say it all. – Well, as I’ll get off at the next station, give me your card with your address to send scientific material with utmost urgency. The old man carefully opened his pocket and gave his card to the boy. When he read what there saying, went head down, he felt worse than an amoeba. The card read: Professor Dr. Louis Pasteur, Director General, Research Institute, National University of France.

Benefits of reading the Bible.- The bible itself says, “can make you wise for salvation through faith in Christ Jesus … is useful for teaching, rebuking, correcting and training in righteousness, so that the man of God may be thoroughly equipped for every good work.” 2 Timothy 3: 15-17

Loving Father, thank you for the Bible, your word revealed. Thank you for the benefits of reading. That the first activity of the day is get your messages to direct our life. In the name of Jesus, amen.